This is an unbelievably quick and easy raspberries and cream dessert. And with only five ingredients, the fresh flavors of the raspberries and blackberries really shine through.

This combination of fresh berries and whipped coconut cream is absolutely decadent.  This time of year, when summer berries are at their peak, is the perfect time to make this raspberry blackberry coconut parfait. It's deliciously gluten-free, dairy-free and refined sugar-free.

The key to making this dessert quickly is having coconut milk stored in the refrigerator. I always have a couple of cans chilled so I can whip up coconut cream at a moment's notice. This simple dessert is the perfect use for it.

With the coconut milk already chilled, it only takes ten minutes to put the raspberry blackberry coconut parfait together. And with just fruit, coconut milk and a touch of honey and vanilla, it also makes an easy breakfast.

Why You'll Love This Raspberries and Cream Parfait

How To Make It

What Is A Raspberry Fool?

While I call this delectable dessert a parfait, which is generally described as a layered effort of whipped cream, ice cream or yogurt, followed by fruit and/or other sweet toppings, my recipe also checks the boxes as being a Raspberry Fool.

The term "fool" is a British way of describing a dessert that consists of folding mashed or puréed fruit into a creamy and sweet custard or a sweetened whipped cream mixture.

Can I Make These Parfaits Ahead Of Time?

You can certainly make the coconut milk whipped cream ahead of time. Whip it and store it in the refrigerator in a glass container with a tight fighting lid.

I would not actually assemble and layer the parfaits ahead of time, though. Coconut milk whipped cream isn't quite as heavy and thick as dairy whipped cream so adding ingredients between layers has a tendency to weigh it down and deflate it. It's best to assemble it right before you're ready to serve it.

Can I Use Frozen Berries?

Yes, you can. Let them thaw in the fridge or on your countertop enough to be able to mash them for the Raspberry Fool layer.

Can I Use Other Fruits?

Absolutely. Any berry is delicious, but you can also fold in other fruits such as apples, mangos or peaches. If you can't mash the fruit, try dicing those types of fruits into small pieces or even creating a rough purée with them for ease of folding into the whipped cream mixture.

How To Make This Dessert Into A Breakfast Parfait

I love that this recipe can also be turned into a healthy breakfast parfait.

Just make the raspberry cream layer. Then use whatever fresh fruit you have available such as blackberries, blueberries, strawberries or even bananas. Layer this in, followed by a layer of my homemade grain-free granola and then follow with another layer of the fruity coconut whipped cream, or just the coconut whipped cream. And of course, I top it with another layer of granola.

It's handy to have a stash of prepped whipped coconut cream in the fridge as well as a jar of my homemade paleo granola in there, as well. That way it's ready in just minutes and is the perfect way to start the day.

How To Make An Even More Decadent Version Of This Parfait

For an even more elegant dessert, you can take the raspberries and create a thick puréed sauce, or coulis, right on your stove top.

It's best to make this sauce ahead of time so that it has time to cool and be refrigerated before folding it into the coconut whipped cream.

To make it, just add the fresh raspberries, honey and 2 tablespoons of fresh lemon juice to a sauce pan and bring to a boil over medium heat. Let the mixture reduce until thickened. Purée it in your blender and refrigerate until completely cool. Use this concentrated raspberry mixture to gently fold into the coconut milk whipped cream.

Reserve a bit of the raspberry coulis to drizzle over the top layer of the parfait, along with a few fresh berries for the final garnish. 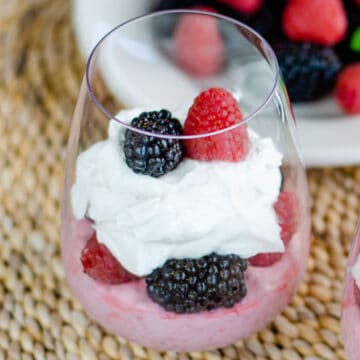 For vegan: use maple syrup for sweetener if desired For Whole30: omit sweetener